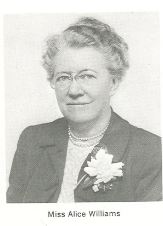 Every successful organization is driven by a collaborative effort, but every so often there comes a rare, influential person who acts as a conductor who seamlessly pulls together a multitude of moving parts. In the early beginnings of the United Way, that person was Alice Williams.

In 1921, Alice was appointed the first permanent staff position at United Way (at that time known as The Joint Charities and Community Fund). While women were making great strides in the “Roaring 20s,” from pushing societal boundaries and gender expectations, to gaining de jure equality with the Equal Rights Amendment, there were still many obstacles to becoming a “lady in charge.” Many women of that era were only accepted in the workforce as secretaries or typists, and there was very little mobility from those positions.

Then there were the exceptions to the norm, like Alice Williams, who served as Executive Director of United Way for 28 years.

From her first position as Assistant Secretary, Alice quickly learned how to keep pace with some of the most powerful men in Buffalo, including the charity’s founder Ansley Wilcox; renowned lawyer and board member of Marine Trust Company, Walter Cooke; J.F. Schoellkopf of National Aniline and Chemical Co.; and Seymour H. Knox II, whom many know as one of Buffalo’s most generous art enthusiasts and an inheritor of his father’s share in the Woolworth Company. Overcoming the gender bias of her time, Alice earned the respect of her male colleagues with her tactful communication and tireless work ethic. She was the go-to person for the organization’s biggest questions and a stronghold during campaign time.

I have never worked with anyone who anticipated every requirement, and who was so untiring in every effort that goes toward creation, development and operation of a smooth running machine…No matter what mistakes I might make, you could easily pick them up and correct them, [which] made what we did do, possible.

Of course, Alice wasn’t the first woman to play a large role in United Way’s fundraising. At the start of Joint Charities, there was a separate Women’s Division for campaigns. In fact, the women’s teams tended to be more organized and energetically charged than the men’s. By the fifth annual Joint Charities campaign, the secretary of the Federation of Charities and Social Service Agencies noted that the women’s division was ahead in its organization of volunteers, while the men’s division exhibited a “mad scramble to get men on the teams…[with] the usual scattering of ineffective and inexperienced people.”

The neighborhood divisions carried a sense of pride. They didn’t bring in as much money as the business and industrial divisions, but they were an important part of the campaign. The women’s division was another face of United Way, another positive representation of the organization in the community. They chatted with people in their homes, spread the word about United Way, and developed personal relationships that earned more than pledges. In later years, when the number of women in the workforce increased, door-to-door campaigning became less effective because no one was home to answer the door. In effect, the neighborhood divisions and separate gender divisions dissolved.

Alice was the type of person who could adapt to the challenges of her time. She saw Buffalo through the Depression, World War II, immigration shifts, and factory closings. In effect, Alice bore witness to the changes of the organization. She saw the inclusion of the United War Fund, the creation of a broader government welfare system, and the emergence of new agencies. After World War II, Joint Charities transformed into The Community Chest, joining a nation-wide organization that would eventually become United Way.

In 1947, Alice joined the Council of Social Agencies’ Committee on Transient Emergency and Shelter to better understand the problems Buffalo was facing. The Council thoroughly researched the needs of the community and the effectiveness of agencies in addressing the issues of transients.

While Alice was never a campaign chairperson, she made headway for other women to take on similar roles in the organization. It wasn’t until the 90s, under the leadership of Bob Bennett, that Pam Heilman became the first woman to hold the position of campaign chair and board chair. In 1998, Buffalo’s Constance Eve received the prestigious National Alexis de Tocqueville Award, making her the first person – and first woman – associated with UWBEC to receive that award. Not long after, Arlene Kaukus became the first female president to serve the organization (note, there was an institutional difference between “Executive Director” and “President” that changed over the years).

We often hear about women’s desire to break the glass ceiling, but Alice Williams is a concrete example of those efforts in action. To follow, there was a wave of extraordinary women who also achieved noteworthy goals. While there was still a long way to go for workplace equality after Alice left, she played a large part in raising the bar – not just for United Way, but also for men and women everywhere.